This 106-year-old Balham CC trophy was presented to the club by Harry Cusden and awarded annually for the longest distance ridden in 12 hours by a club member. Made in 1913 by Birmingham based Daniel & Arter, it was given to the first winner a year later. With the outbreak of World War One it wouldn’t be ridden for again until 1920 and then only until 1928 when Aubrey Adley won it for the third time in a row and got to keep it. The Langton Memorial Trophy, named after a former president Felix ‘Pa’ Langton who died on 12 February 1929, replaced it.

Details on these efforts are scarce but Arthur Chatting, writing in the January 1950 edition of the club newsletter, gives us a little insight: “When I visited Adley, he showed me the old 12-hour-cup which he won outright from Fred Blaker back in 1928. This race created quite a sensation at the time because Adley, the club record holder, only beat Blaker who was quite new to this distance by the barest of margins in the last few minutes.” 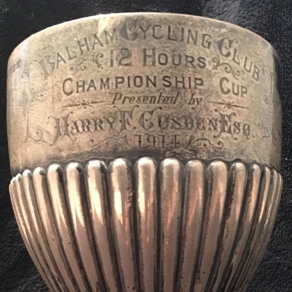 Harry Cusden was president of the cycling club between 1919-1926*. There is evidence of him playing a proactive role before then with a newspaper cutting having him down as judge at the 1907 Club Championships. We have yet to unearth anything on him cycling for the club but we can assume he did.

He seemed to like his sport, as an honorary life membership of Tooting FC would suggest. It would also seem he liked a position in the community and they don’t come much bigger than being Wandsworth Borough Councillor.

His father Jonathan Cusden is listed in the 1891 census as a builder, ironmonger and grocer at 4,5 and 6 Carlton Terrace, Merton Road. In the 1901 census he’s described as a builder, grocer and wine spirits dealer at 215 Tooting High Street. Jonathan was one of the first members of the Wandsworth Borough Council.

Harry was born in Balham on 30th June 1870, living at 27 Bellamy Road, and later 24 Temperley Road. He left Tooting Graveney School to work at his father’s business and then in 1893 opened his own grocery shop in Tooting on Longley Road. He added an off-licence to the shop and then a butcher’s department and greengrocery and soon had a row of shops.

His business expanded and he opened 8 branches, including ones in St John’s Hill, Clapham Junction; Garratt Lane, Earlsfield; Oldridge Road, Balham; Mitcham and Wimbledon. By the mid 20’s he owned almost 40 outlets across South London.

He was a member of the Panmure Masonic Lodge as was Balham CC founder George Huntley, and others in the retail and victualler trade. In 1921, returning from a masonic banquet, he was seriously injured in a car crash on Upper Tooting Road. Colliding with a ‘motor-lorry’, he suffered a broken arm and leg while his mother, a passenger, broke her collarbone.

Harry was a close associate of A.J. Hurley who convinced him to stand as Councillor and they ran successfully for election together.

His properties took a lot of bomb damage during the war. His Will lists a string of properties on Longley Road but numbers 195, 197, 199 and 207 Langley Road are listed as plots only.

He was taken ill in December 1946 and took a step back from the business although remained interested. Many of his employees had been with him since they left school.

He had two sons and a daughter who took over the running of the business on his death. Harry died aged 76 on 29 March 1947 and is buried at London Road cemetery, Figges Marsh.

The trophy is with Balham CC. 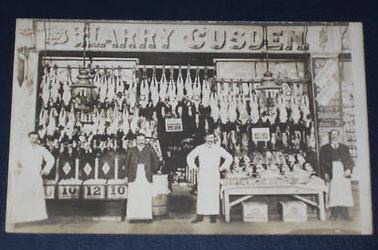 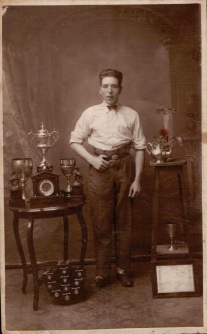 Shop front photos are taken from the book: Balham & Tooting in Old Photographs.

Other photos and census information from Family History site Ancestry.co.uk

The Trophy is the property Balham Cycling Club

*A Balham CC member writing in the club newsletter states Harry was President between 1919 and 1926. This is the only current source we have.

Got a Balham CC story or other Balham memorabilia ? We’d love to hear from you! Email us at Balhamcyclingclub@gmail.com