Tarver and Bowley was a Balham based bicycle manufacturer, best known for the extraordinary looking Euclidia, which had a frame in the form of an oval shaped wheel with a central hub connected by spokes made of piano wire.

Few bicycle designs made it into The Engineer Magazine but this one did. In the 12 December 1890 issue we’re told the Euclidia “is a novelty in cycle construction” an “application in the principle of the tension wheel to the frame” and with a hint of faint praise, “can hardly described as beautiful, but it is certainly thoroughly mechanical.”

The Euclidia, named one assumes in reverence to Euclidean geometry theory but actually sounding more like an sexually transmitted infection, was patented on 8 May 1889 (no. 7734) by F Archer* and Arthur Sidney Bowley, the latter of Tarver & Bowley based at the Grove Works, Balham Grove and 20-23 Grand Parade, Balham.

Arthur Sidney Bowley was born in Abbey Wood, Kent in 1866 to mother Kate and father William a clerk. The family moved around a bit but by 1880 had settled at 7 Byrne Road**. At 14 years old Sydney – evidence suggests he used his middle name – was working as a cork fitter. 10 years later, at the time of the launch of the Euclidia, they had moved to Longley Road, Tooting. Sidney is listed in the census as a cycle engineer as is his brother Percy and his mother.

Less is known of George Tarver but he was born in Westminster around 1858. In 1891 the family lived at 31 Byrne Road just 11 doors down from the Bowley’s although throughout most of the 1890s they lived at 29 Gleneldon Road, Streatham.

The firm claimed to be around since 1886 but production on the Euclidia didn’t start until 1891. Here’s The Engineer with a review, more details on the spec and the principles involved:

“In the ordinary type of bicycle the frame, even in a racing machine, it weighs 8lb to 10lb whereas a strong wheel can be built weighing only 3lb or 4lb. When we consider that the back wheel transmits all the strain and carries nearly all the weight, it shows that it must be built on a far better principle than the frame. In the [Euclidia] machine the tension principle has been most successfully applied to the frame, with the result that the weight is reduced, and greater rigidity obtained. The illustration shows sufficiently clearly the method of construction. The two rims – one on each side of the back wheel – are connected by spokes to a common hub. It is impossible to spring the frame by pressure in any direction more than the amount of stretch in the spokes. As these are made of piano wire, they give the frame a certain amount of elasticity that is indispensable to its durability. The experimental machine, which weighed 33lb, certainly withstood a wonderful amount of knocking about.”

The same year Bowley invented a self-pumping piston to add air to a pneumatic tyre as it revolved. The Engineer reveals: “A small air pump is concealed inside the tire and when the latter becomes too slack, the pump is brought into action, and automatically re-inflates it.”

The 1891 catalogue and advert claimed Royal letters patent. Production wasn’t prolific but they did sell it internationally with evidence it being exported to Denmark at least.

A Tarver & Bowley ad in the 16 May 1891 edition of Cycling, gives a flavor of some of the positive press reports at the time:

Tarver & Bowley was taken over by the Euclidia Cycles Syndicate Ltd on 4 September 1891 with authorized capital of £6,500, but both men were involved in the new venture.

Two months later they were exhibiting at the Stanley Show at Crystal Palace showing 12 Safeties and a bloodhound boneshaker.

Bicycling News October 24 1891 reported: “This exhibit consisted of the ‘spoked’ frame introduced last year. The double frame is also strongly stayed across, before and behind the chain wheel bracket obviating binding when dealing with the back wheel bearings. They also had a 22lb race and a peculiar combined saddle-pin and spring”

Cycling reporter CW Brown was not enthused. In the CTC Gazette for January 1892 he said: “The Euclidia frame is one of those ideas which are all right on paper, and are apparently almost perfect to the unthinking cyclist. To those wheelmen who keep their cycles in glass cases I can recommend the machine.”

His main issue seems to be the practicality of cleaning it.

The company did get some good publicity when Hal Berte used one at the 1892 six-day race in London.***

Things don’t sound too rosy fiscally though, as the Yorkshire Evening Post reports that the Euclidia Cycle Syndicate are taken to court over a non-payment.

By 4th October it’s all over for the Syndicate. A liquidation notice appeared in the London Evening standard, 22 August 1892 and an auction was held at 20 Grand Parade a week later with all sorts of bicycles, tricycles and bike building paraphernalia for sale.

The Euclidia Cycles Syndicate was wound up on 13 December 1893 and the National Cycle Mfg. Company of Fetter Lane, London, took over the business and patents. After the takeover the Euclidia appeared at the National Show in January 1893. It had a flatter oval and a seat pillar brought forward that was more over the bracket.

Shortly after the 1893 show appeared the final version. An ad of the time tackles the subject of its unusual design, which one can assume still hasn’t won-over the bicycle buying public.

“We are often asked, ‘Could you not do without those spokes?’ As it is to the wires we owe the enormous strength of our machine, each wire having a breaking strain of half a ton, supporting the tube in the frame every five inches, and giving a strength equal to two wheels, We could not! – And at the same time build the marvelously light and strong frame that we do.”

The ad goes on to say “fulfilling unprecedented demand” but no evidence suggests manufacturing went on beyond 1894. 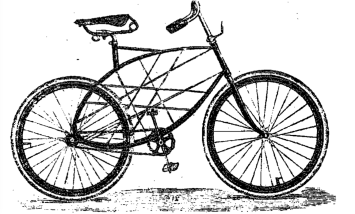 Illustrations: Various iterations of the Euclidia from 1891-1893

As for our protagonists, Bowley is listed in the 1901 census as a cycle traveller (salesman) and living at Werter Road, Putney with his mum and eldest sister. The fact that Putney Velodrome is half a mile away is surely no coincidence. By 1911 he had ventured into rubber manufacturing. Arthur Sidney Bowley died in 1929 and is buried at Putney Vale Cemetery.

In 1901 Tarver had moved out to Broadwater, West Sussex and is named in the census as an engineer and inventor. By 1911 he was living in Suffolk with his sister employing two people as a fishing line manager and inventor. Wonder if it involved the use of piano wire. Tarver died in 1921.

** On 19 September 1880, five of the seven Bowley children including Sidney and Percy were baptized at St Mary’s, Balham 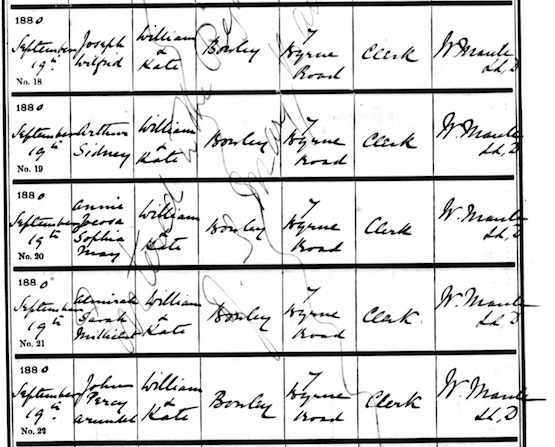 *** Hal Berte also rode in the six day at Glasgow in February 1893 replacing the Euclidia during the race for a lighter model. Not such good publicity.

Can you add to the Tarver & Bowley story? Any information on the company, Grove Works or Grand Parade; or the Euclidia?  If so, I’d love to hear from you. Email balhamcyclingclub@gmail.com or write in the comments below.

An Encyclopedia of cycle manufacturers, Third edition, The early years up to 1918, Compiled by Ray Miller, Veteran-Cycle Club

Sixday.org.uk website for the London race and Glasgow race

From the Veteran-Cycle Club Library: