In the winter of 1920, with daylight hours short and weather miserable, a band of Balham CC members thought it wise to go on a shorter ride but include a running race in the day’s proceedings. By the 1930s this winter novelty had turned into a national event, attracting cycling clubs from all over the country.

Peppering the winter rides calendar with some frivolity was not an alien concept for Balham CC with hill climbs, speed judging competitions, free wheel races, Paper Chases ‘The Mystery Race’ and two-mile walking races all featuring.

In 1920, a two-mile run was organised to take place on the lanes around Epsom Common. A year later Belle Vue Cycling Club suggested turning it into an inter-club event with the losers paying for the medals. Balham CC won that year although as club stalwart Bob Davey remarked in the club newsletter the Balham Gazette, “It was the first and only time we licked them.” 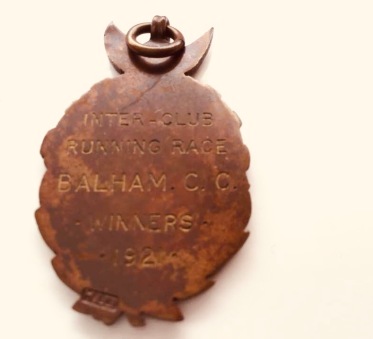 The two-club cycling challenge soon drew the attention of more clubs and it wasn’t long before the newly monikered Epsom Running Race for Cyclists had moved to Epsom Racecourse to accommodate the increase in runners and spectators. Now “twice around the gallops” the new distance was approximately 5 miles.

Wolverhampton Wheelers, led by UK cycling trailblazer Percy Stallard, dominated the event in the few years before the war*.

At some point Belle Vue take on the organising of the event and claim it as their own. It rankles with some members, one describing it in the Gazette as “An annual running event pinched by Belle Vue.”

Bob Davey was more circumspect in the same magazine declaring “I suppose if we were foolish enough to leave the handling of the affair to the Belle Vue, we cannot blame them for seizing all the available publicity.”

We get a sense of the size and popularity of the event in a Gazette report from 1938. “…After the run a good muster of the club went over to Nutfield for lunch and darts. Owing to the fact that the Queen’s Head had expected about 50 hungry cyclists, and about 150 turned up, lunch was not all that it might have been.”

We’re told one year 10 clubs and over 50 runners took part. We’re also told that runners had to get their start numbers and meal tickets which suggests some reasonable infrastructure and organisation was needed. As Davey stated, “…it’s moved on from a few cycling boys having a go at an unaccustomed sport..”

The last mention of the race in our own records is in 1951. BCC members describe training for it on the common twice a week as early as June. This was for an event run in December!

Balham CC had a reputation for cycling event innovation and promotion with The Balham Rough Stuff 25, the Second Class Open 100, and the 25 miles Tandem-Paced NCU Championship.

This one escaped them though. It’s a shame. Keeping hold of the event, a tweak to the format here and there, we could have laid claim to inventing the duathlon…

Source material – made up largely of recollections in the Balham Gazette from older members  – is inconsistent when it come to dates. One source states that between 1925 and 1939 it was an inter-club event between riders from Balham CC and Belle Vue. Another states Wolverhampton Wheelers won it for a few years before the war.

Epsom is synonymous with Balham CC. The Ivydene was used as the club’s county quarters (1932 Club Handbook) and Epsom Town Hall was one of the three main pick up points for those members living further out of Balham (1949 Club Handbook)

The A24, was of course (and still is), a major gateway to the Surrey and Sussex countryside from London, going through Clapham, Balham and Tooting to Epsom and beyond eventually hitting Worthing. Some of it formed part of the old roman road Stane Street. We still use it!

All quotes from the club members newsletter The Balham Gazette

If you can add to the story of the Balham/Belle Vue Epsom Running Race for Cyclists please get in touch balhamcyclingclub@gmail.com

4 thoughts on “A Day at the Races: Balham CC and the Epsom Run for Cyclists”